Review: Garst Women vs. Religion: The Case Against Faith and for Freedom 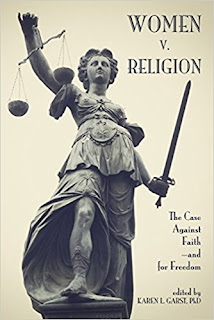 Lisa Kendall grew up in the Move of God, leaving at 19 years of age. You can learn about her experience and perspective at Counter Cult Coalitionon Facebook. She is writing a memoir about her crazy family and bizarre upbringing called No Place Like Home.

Karen Garst has edited another excellent anthology of thoroughly researched essays. Garst’s first book, Women Beyond Belief, is a popular collection of autobiographical essays exploring the experiences of women who have left religion.

This time, Garst explores the three principle Abrahamic religions, Islam, Judaism, and Christianity with the help of a diverse group of women raised on different continents, in different religions, and speaking different mother tongues. The variety of issues explored are expansive; psychological harm, shame over the female reproductive system, lack of autonomy, evolution, rejection of science, finding community outside religion, secular healers, and treating mental illness- to name a few.

Garst fearlessly takes on the church’s long history of denying women. The essays in her book explore the extensive oppression of half of their members, keeping them from living as fully developed people. These determined women provide a lens through which we can better contemplate how our own brand of religion limited self-determination and hobbled personal development.

Garst’s strong suit is analyzing complex systems with an eye to their historic, and even prehistoric roots. Extensive research coupled with thoughtful contemplation allow her to penetrate the tangle of religious leaders’ motivations and consequences for women. Her relatively positive experience in a Midwestern Lutheran church community allows her to penetrate concepts too often clouded by emotion.

Garst has a knack for illuminating the busy intersection of adherence to dogma and freedom from religion. Her work serves as a guide for people, men and women, sorting out their relationship to the flavor of mythology they learned as children. For many, her work leads to insights that allow for healing and independence.

Candace Gorham provides the first essay which opens with the stark biblical verse of Jeremiah 8:15, “We look for peace, but find no good, for a time of healing, but find terror instead.” Guilt, Shame, and Psychological Pain is a brilliant exploration of the suffering caused by blindly following one’s faith and church leaders entrusted to provide guidance on one’s path.

The discussion of guilt and shame offers a path to emotional freedom while piercing the paper tiger that facilitates manipulation by too many religious traditions.

Gorham’s section on religion and mental health therapy reveals how indoctrination of mythology permeates one’s interaction even unintentionally. This essay could provide churches with a road map of how not to do harm to women and children, the most oppressed heteros in most churches.

“Countless women have been compelled to continue life as usual with lovers, ministers, fathers, uncles, brothers, coworkers, and caregivers who have sexually violated them.

I’ve collected dozens of stories from women who never revealed their experience specifically because the guilt they felt came from their beliefs about god’s expectations. What a powerful degree of shame and self-blame it must be to keep a victim of such a traumatic experience silent! It is a degree exponentially multiplied under the incalculable influence of religious misogyny and hegemony.”

With her turn at the pen, Valerie Tarico takes on more abstract ideas about ownership in her Owned: Slaves, Women, Children, and Livestock. Her penetrating analysis of biblical support for slavery and the subjugation of women explores the various forms of ownership inherent in the patriarchal structures laid out in the old testament-beyond the explicit approval of slavery.

“Throughout the…Bible, God does what he wants to the creatures he has created: blessing, deceiving, selectively favoring, infecting, healing, rescuing, pitting one against another, burning or drowning en masse…you name it. They belong to him, so normal moral constraints don’t apply. The fact that they have minds and preferences of their own—the fact that they can feel pain or love or can yearn for life—doesn’t really matter in the moral calculus. They are his; he can do what he wants.”

Tarico provides a fresh voice in the current discussion of the residual effects of ancient ownership on contemporary American culture;

“Women will be saved by going back to that role that God has chosen for them.Ladies, if the hair on the back of your neck stands up it is because you are fighting your role in the scripture.”  —Mark Driscoll, founder of Mars Hill nondenominational megachurch franchise (1970–)

Driscoll, a popular evangelical speaker and author…, likes to remind people that every book in the Bible was written by a man. He sees that as confirmation that God wants men in charge, communicating his will to the rest of us.”

We hear the bible’s echo in Tarico’s clear explanations of current customs in some corners of Evangelical networks;

“The echoes of chattel culture couldn’t be clearer: These girls explicitly pledge their reproductive tracts to their fathers who will then give them to a mutually-agreeable young man.”
“Fetal personhood laws are legal sleight of hand intended to ensure that the rights of actual persons don’t interfere with the hierarchy of God and man over woman and child.”